When we first started A Wee(kly) Dram, we had accumulated what, at the time, felt like an endless cabinet full of whisk(e)y to review. Now that we’re 40+ reviews in, we have realized that our pace of reviewing bottles was significantly quicker than our pace of finishing and replacing them. Since keeping our cabinet fully stocked with new bottles can be a pricey endeavor, we like to visit some of the city’s whiskey bars to try new and interesting drams.

One of our city’s most well-known whiskey bars is Delilah’s. This Chicago institution, opened in 1993, features over 800 whiskeys (along with plenty of spirits & beers). Taking a look at their shelf and vast spirits menu book can be overwhelming, so visitors should take advantage of picking the brains of the knowledgeable bartenders for recommendations. Even with 800+ bottles of whiskey, it seems as if the staff can always find something interesting and unique for you.

In addition to their incredible selection, Delilah’s is known for its punk-rock aesthetic (although they will feature different genres of music from Metal to Ska & Reggae and others). When we were there on a recent Friday night, we were able to catch a few minutes of a Queen documentary on one of their few TVs while punk music played throughout the bar. If you’re planning on heading there on a weekend, it’s best to get there on the earlier side as the bar can get pretty crowded—especially if they are hosting a private event on the second floor. The crowd Delilah’s brings in is as wide and diverse as their whiskey selection. If there on a weekend, one will see customers ranging from groups of college students (fun fact: this was the first bar Cali went to as a college freshman) to younger couples to older men decked out in leather jackets. Lady Gaga has even been spotted here. With their nearly limitless offerings, Delilah’s has something for everyone.

As mentioned, looking through their vast book of whiskey options is no easy task. Among the options are several bottles filled by various distilleries exclusively for the bar. Although organized by type/region, the sheer volume of choices can be daunting. During our last visit, we noticed the bar’s selection of Compass Box whiskies. The list included No Name, a deliciously peaty blend, which Cali had been eager to try since last sampling it at a whiskey event nearly a year prior. Leonidas opted to try the Royal Brackla 12 year, one of the whiskeys on special for the evening. After we ordered our first round, we were able to snag a seat at the bar to take advantage of the bartender’s recommendations for the rest of the night. 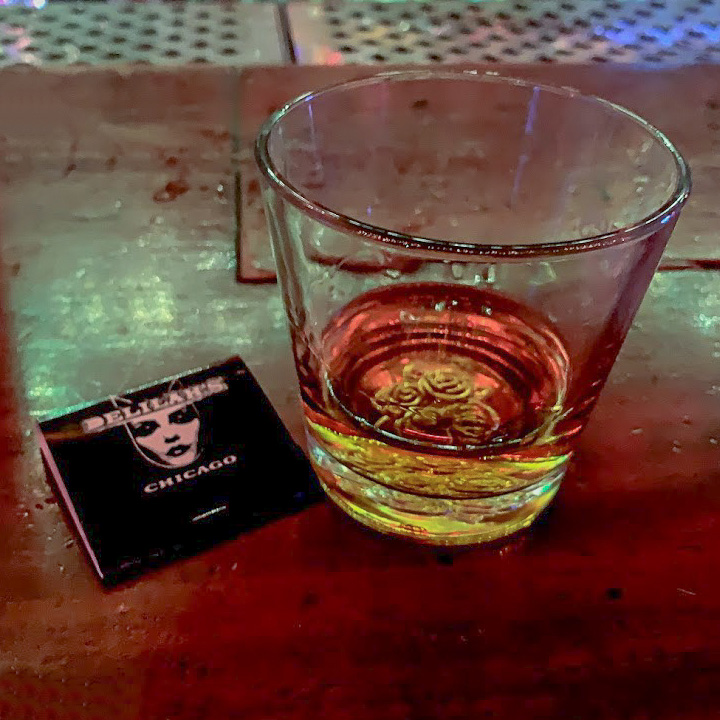 (From Left to Right: Royal Brackla 12 year, Compass Box No Name, “The Rarest of the Eagle Rare”)

Eyes: Being a bar utilizing holiday lights, it was a bit tough to determine the true color of the dram, but we’re going with a light maple syrup color. At any rate a medium dark dram. Rich texture in the glass. Nose: Clean and fresh at first, with aromas of red apples, cinnamon and book bindings emerging. Taste: The flavor was fairly decadent, with plenty of dessert notes—rich caramel, cherry sauce, and dates. Finish: The sweetness turns quietly to oak tannins. A smooth and lingering finish.

When we researched this distillery later we learned that Royal Brackla was the first distillery to receive a royal warrant, courtesy of King William IV. Finished in Oloroso sherry casks, this was a delicious dram, not unlike the Glenfarclas we reviewed last December.

Eyes: A light, pale honey color, with a lighter texture to match.

Nose: The nose was an intriguing mix of camp fire, ammonia, and cinnamon rolls.

Taste: The flavor of No Name elicited heavily salted bread, seaweed, along with roasted red meat.

Finish: The finish turned up the heat, with notes of cinnamon and cloves.

This is a meal of a dram. The DNA is overwhelmingly Islay, and while the nose evoked Caol Ila, the flavor was very much an Ardbeg. With the recipe available on the Compass Box website, we could understand what we were experiencing. The peat wasn’t overwhelming, however, especially given how much heavily peated whisky is in the mix.

Delilah's 866th Bottle on the Wall “The Rarest of the Eagle Rare” A Tribute to Elmer & Joe C. 90 proof

Nose: Bourbon nose but without the alcohol punch. Very fragrant and sweet.

Taste: The flavor was peculiar, sweet at first with some telltale bourbon traits, but overall the flavor evoked dry, almost root vegetable flavor.

This was a bartender pick, and it was a very easy drinking and flavorful bourbon.

Nose: The nose is like walking out into a field in Islay, plenty of grass and dirt. Underneath the field are some honey sweet notes, similar to an Ardmore.

Taste: The flavor is heavy on grassy, earthy peat and honey mixed with fresh bread

Our last dram of the night, this version of Cairdeas was finished in port barrels and was a departure from classic Laphroaig flavor. The peat was more muted and the sweetness was turned up a few notches.

If you live in or are traveling to Chicago, Delilah’s is well worth a visit. The atmosphere is fun and a bit raucous, the whiskey list enormous, and the bar staff will definitely guide you to something rare or exceptional. We’ve rarely left the bar without trying two or three interesting drams, and for us it has become the kind of place where we ask a bartender for a recommendation first before searching in the giant whisky menu. Chances are they have something you have never seen before, and at prices that are much more reasonable than other establishments.